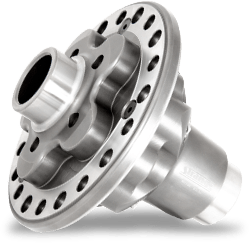 Differentials
Open Differentials are the most basic type of differential. An open differential is designed to free-up the tire with the least traction. This is accomplished with a set of spider gears which allow the free wheel to spin faster so it can catch the wheel with the most traction. No good for high-performance.
Strange Clutch Type Differentials use a system of clutches (sometimes on one side, sometimes on both sides) to distribute pulling force between the two axles. Spider gears are also used in this design. Great for stock and performance street applications.
A tapered housing with cone-shaped gears gives the Cone Type Differential its name. It works in much the same fashion as the clutch type differential but uses spring pressure instead of clutches.
Lockers and Helical Gear Units accomplish the same fundamental purpose – they cause both axles to pull (only) under acceleration. Locking differentials are very strong but can be noisy and unrefined. The Helical differential offers a smoother transition, along with a level of durability comparable to that of the locker. It’s basically bulletproof. Recommended for street/strip applications.

Spools
Strange Spools, in steel, forged aluminum and lightweight aluminum, are stronger and lighter than a differential. With no gears or clutches, the spool only allows both axles to turn at the same speed. Spools have the capacity to handle a greater torque load. That means larger (more splines) axles that are much more durable. Spools are for racing applications only.