Gary Bingham is no stranger to the winner’s circle, but in 2014 round wins proved hard to come by for the four time World Champion. At the inaugural PDRA event in Rockingham, N.C. a broken driveshaft sent Bingham home in round one, after which his Competition Products dragster would require chassis adjustment and radiator repair on top of the new drive shaft. Bingham managed to get things back in working order before the next PDRA event in Valdosta, Ga, but went home with a breakout loss in round one. With ample determination, Bingham headed to the Inaugural Memphis Drags looking to make a change in the direction of his season. Having run an IHRA divisional race the weekend before, he’d had no time to make some needed repairs to his shocks before pulling in the Memphis International Raceway gates. “I knew I needed to have a leaky shock repaired, but when I pulled them off on Thursday at Memphis I found out they were spent,” relayed Bingham. “I called Jeff Stange at Strange Engineering and they overnighted me a new set.” With the Strange Engineering shocks in place, Bingham qualified 15th in STT Safety Equipment Top Dragster. In the final round, Bingham would have to face another Mandell. This time is was Bob’s brother, Jeff. Unfortunately, Bingham would post his worst light of the event, and wouldn’t have enough room to get inside of Mandell’s dead on run. “Without Jeff Stange and Strange Engineering I wouldn’t have even been racing this weekend, much less in the final,” told Bingham. “I really appreciate them coming through for us in such short notice.”

Strange Engineering has always supported the racers of God Speed Ministries, who are no stranger to our product line; but at last years PRI show, Renee and Gary Bingham met with Strange Engineerings` President, Jeff Stange, to discuss possibly doing more in the coming season. Renee Bingham explains:

“Our Chaplains at God Speed had been working year round in our current Chaplain shirts. They were faded from the sun, very hot, and needed an all around ‘new look’ This is where I decided to speak to Jeff about possibly sponsoring a donation for new uniforms for next season. We spoke at the PRI show, and agreed on a new slogan for the back of the shirts. ‘It`s A Strange Life, Let God Lead’, was chosen and Jeff made a donation so that we could get these new uniforms and our entire chaplain group could have a new and uniform look! We have gotten so many compliments on the new shirts, the design is fantastic and everyone loves them! We even had people coming up to us at the track, asking if they could purchase the shirts! We are so thankful for Jeff and Strange Engineering for making this donation to help improve the look and unity for the God Speed Ministry!” 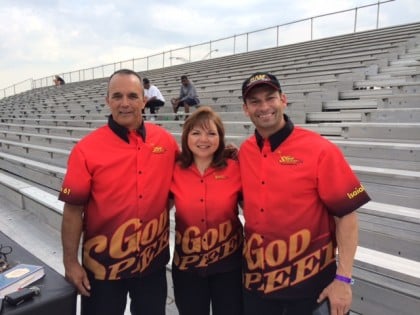 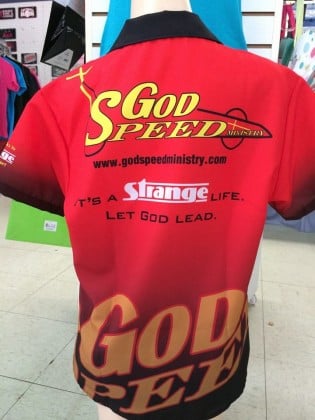 Chaplains do much more than just preach at chapel services and do an invocation. They take the initiative to administer every area required to answer God’s call to serve the people involved in motorsports. Chaplains are there before the first car goes down the track and stay until the last car if possible. This makes for really long days and short nights. Those chaplains who are staying at a hotel for the weekend endure the heat, wind and/or cold of nature while at the track. Their only refuge is their car or the hospitality of racers. Those fortunate enough to have a camper or motorhome at the event do have a place of shelter but the cost is great to maintain these rigs. They bear that cost themselves.

Many of the chaplains serve as couples, husband and wife. However, even when serving as a couple isn’t feasible, God Speed Ministry encourages chaplains to follow the biblical model and go out two by two. Mike Imhoff and Chic LaNasa heard God’s call to be ministry chaplains and have covered IHRA Division 3 since 2006. As a ministry duo, they work together as friends and brothers in Christ, serving as both God Speed and Racers for Christ certified chaplains. Their hearts shine with the Spirit of God within them. God ordained their partnership and place in ministry. Chic tells us how his place in ministry came to be:

“I get my love for racing honestly. I inherited it. I have a photo of my uncle racing at the Indy in 1934. I hung out at Dragway 42 when I was young. Don Garlits came to Dragway 42 in 1959 with Swamp Rat 1 with no crew. I helped push the Swamp Rat to the lanes, made sure the tires were clean, etc. What a memory. I got to crew for Big Daddy Don Garlits! I was at the track one day when God spoke to me. ‘This is where your heart is. Where your heart is there your treasure will be.’ He knew my heart was in racing. I served at a local track long before RFC or God Speed. I served as a chaplain before I raced. I did it alone. It was how I learned to do it. I spent most of my time setting up for service and tearing down rather than talking to people. It was hard. I felt alone. Yes, I knew God was with me but I still felt alone. It wasn’t good. Now Mike and I are a team. It is much better. You have support.”

Mike then explained his love for the motorsports ministry:

“I love racing! My heart is the Stock and Super Stock classes. I set the record in B Stock the first year IHRA was in existence. I still have the certificate and picture. Chic and I have a lot in common. I also got to help Don Garlits one time. I pushed him off the track the last time he competed at Indy! I raced before I got into ministry. When I felt the call into race ministry Chic was the first person I met. He was working with RFC at that point. We formed a bond that has lasted all these years. Chic is the kind of person who always looks for ways to help. He makes trips so much easier and more enjoyable by all the little things he does. We make a great team. We both have a heart for people. Each race we try to touch those who are furthest from God. If one thing we say or do brings them one step closer to God then it was a successful event. My favorite part is praying for people, especially those far from God, I love to open the door for God to work in their lives and reveal Himself to them. There is no greater thrill than to see someone encounter God!”

“I love to sit in the crowd or stand along the fence wearing my chaplain shirt or GSM t-shirt. All you have to do is listen. People will talk. They will initiate questions. Just be there. Just listen and they will give you the invitation to share the gospel with them or pray with them.”

Just as much as the races and racers themselves, motorsports chaplains require covering in prayer. They have need of connection with others who understand what they endure in the situations unique to the mission field of motorsports ministry. They need a base of support just as other missionaries serving in foreign countries. That necessitates funding to staff and to maintain an office year round. Referencing the need for partnership with God Speed Ministry, Top Sportsman World Champion Steve Corker said,

“We have to keep the lights on and that takes money.”

We made a short video to introduce you to your God Speed Ministry Chaplains, and get a small glimpse into what all they do for our fellow racers, friends, and families! Check it out here:

There are an estimated 500 motorsports chaplains covering the full arena of motorsports from drag racing to road course, circle track, off road, boating, motorcycle and beyond. 500 is such a small number when you think of the amount of events held throughout the year on a local and national level. God Speed Ministry certifies chaplains to cover every event for multiple sanctioning bodies. Yet there is still a great need for a spiritual presence at local tracks. This is where you can participate. How?

-Pray for your track; its leadership, finances and integrity.

-Pray for God’s presence throughout events to establish safety, goodwill and joy.

-Pray for chaplains as they minister.

-Volunteer to assist at the track, in the office, writing articles or sharing your resources, talents and testimony. God Speed Ministry REALLY wants to hear from you! Let them know! Email [email protected] or call them at 704.473.4212.