If you are in the index racing world, you know the name Fonse Performance. If not from the Dyno Wars they put on to keep their racers out of the “winter blues”, then perhaps it is from the amazing customer service you will get by stopping by the Fonse Performance shop. Even in the event that you have not had the pleasure of the above mentioned experiences, Fonse Performance and his family oriented team are impossible to miss on a night of good racing down at Cecil County Raceway! They can be noticed by their large Strange Engineering flag that is usually flying over their trailer. Fonse Performance and the entire family have been one of Strange Engineering’s most spirited representatives out at the Cecil County track and we at Strange are proud to be associated with them!

This is not a blog about friendships however; this is a blog about championships, titles, and what all we can look forward to as Alfonse Jr. and the Fonse Performance team gear up to defend that Champion title at the Strange Engineering Outlaw Street Car Reunion! Alfonse Jr. and the team raced like a winner right out of the gate last year, and held that lead all the way through the season! For 2017, they have changed the dress on the famed “Strange Stang”, and the entire team is hopeful to be racing “Strange” for the Title again at the end of this season! I was able to get in touch with Alfonse Jr. and find out from the source on his feelings about the Title last season, the changes for this season, and hopes for the future!

Tell me about the 2016 season for you and the team…trials, tribulations, and ultimate domination!

Piloting the Strange Engineering\K&S Race Cars\Fonse Performance 8.50 index mustang was no easy feat in the 2016 racing season.  We fought tumultuous weather conditions and record setting heat. We were able to get a huge points lead at Cecil County and win the first 3 races. After that we never looked back!  In the end, we were the 2016 Cecil County Strange Engineering Outlaw Street Car Reunion 8.50 index track champions.  We were also able to place 2nd at Atco Raceway and Englishtown Raceway Park for the 2016 season end!

We know that the Fonse Performance/K&S Race Cars mustang is known as the “Strange Stang”…tell us a little about what all Strange Engineering components are on the car to get you safely down the track fast and first!

The “Strange Stange” is all Strange Engineering from front to back.  We are running  Strange 2-piece steel front and rear brakes, a Strange 9′‘ HD 3.812″ pro aluminum case with lightweight spool and pro gear set, and 40 splined gun-drilled axles with Ultra Light option.  Up front we have double adjustable Mustang struts; and rear coil over double adjustable Strange shocks and Hyperco Springs handle the power delivery to the ground.  These components delivered and without a doubt helped us win the 2016 championship at Cecil County.

The Fonse Performance/K&S Race Cars/Strange Engineering mustang certainly was well known for its looks last season. We know that there was a lot of work put into preparing a new wrap for the 2017 season, as well as shots we have seen of your new helmet! Tell us a little bit about the ideas and people collaborating to make that happen.

New for the 2017 seaon the “Strange Stang” got a new look.  Jeff Stange wanted to update the wrap and for us to think about what we wanted for the new look  The ending wrap was a collaborated effort designed by all of us really.  I didn`t want to change the Strange Engineering recogniton of the car with a totally new look and design~in fear the car wouldnt be recognized as the branded “Strange Stang.”  However, with the efforts of Jeff, Matt, Steve, & myself, we all came up with a nice sleek look that`s very pleasing to the eye!  Phil at Rage Wraps was the main man to make the wrap and finalize the art work. Rage Wraps continues to deliver high quality bad ass wraps. 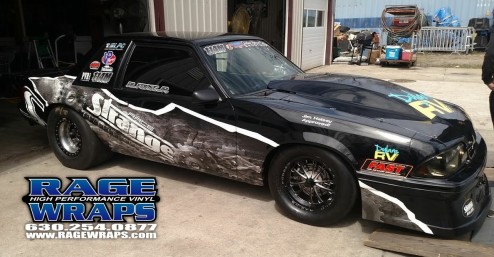 I contracted Johnsons Powder Coating out of Berlin NJ to come up with a radical design of my racing helmet.  I gave a few ideas to Sara Johnson and they took off with it.  Everyone has to see this helmet in person!  It has oustanding detail is so bad ass!   I always thought when the driver is photograped in the car~ you see his helmet~ so why not have something eye catching in the photo!  Johnsons Powder Coating simply knocked it out of the park! Its amazing and everyone should have it done !!! 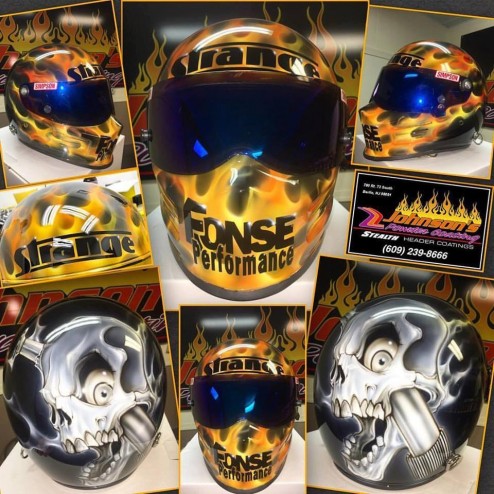 Well we cannot wait to see it at the track! We know you and the team have been gearing up for 2017. What all goes into making sure that you are ready to defend your title in the upcoming season?

For 2017 we freshened up the Fonse power plant starting off the season with a fresh engine as always. We also had the transmission and convertor rebuilt to ensure round by round repeatability. We rebuild and replace everything to start the new season – leaving no room for error.   Car owner Steve Poserina has some early season plans for rear end changes to aid even more in consistency at K&S race cars. We also plan on testing and debuting the new Strange Monotube shocks this season! Stay tuned for testing results! We plan on keeping our championship ranking and hopefully collecting other track championships this 2017 racing season. We Race ! We Win ! Race Strange !

We at Strange Engineering are wishing Alfonse Jr. and the entire K & S Race Cars/Fonse Performance team the best of luck in their 2017 season! We hope that you will stop by to show your support for them if you are ever at Cecil County Raceway, or anywhere that you see the Strange flag flying! #RaceStrange !